Coffee Cups and the ‘War on Waste’ 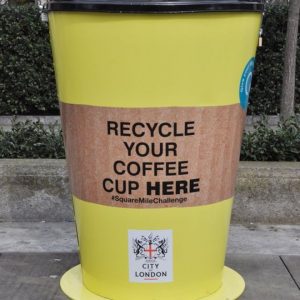 The war of coffee cups has begun, and it’s no surprise considering only 1% of the 2.5 billion paper coffee cups used in the UK each year are recycled. Although people often have the best intentions, most coffee cups have been treated with ‘polyacetylene’. Simply put this means the cup is coffee proof, but consequently hard to recycle. So, even when a cup is thrown into a recycling bin with mixed recycling, it still ends up in a dump.

People have been discussing coffee cup waste for a while, with some people opting for purchasing their own sustainable cup which they can use again and again. Hugh Fearnley-Whittingstall added fuel to the conversation with “Hugh’s War on Waste: The Battle Continues”, a BBC1 documentary shedding light into the coffee industry and the huge volumes of wastage produced from it.

The good news is we are on our way to a solution. This week, a new scheme was introduced in London called “Square Mile Challenge“, aiming to recycle five million disposable coffee cups this year. More than 100 retailers and 30 organisations are involved. Bins in the shape of coffee cups have been placed around the city and the participating organisations will display yellow stickers in their windows. The coffee cups collected from these bins will be recycled correctly. With changes happening already, one things for sure,  the war of coffee cup wastage is only just beginning. 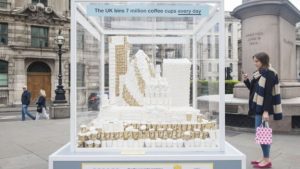